A comparison break-down on what went on for Day 7 of FIDé Fashion Weeks 2013, where Asian Couture razzled and dazzled.

Hailing all the way from Korea to debut his Spring/Summer 2014 collection at FIDé Fashion Week, Lie Sang Bong dazzled us with a spectacular and wearable clean-lined collection.

We love how he used sportswear and street-wear elements to make each look seem effortless yet put-together, portraying a modern feel with stripes and lines yet retaining a twist of Korean by using black floral shapes that were repetitive in a few looks.

Lie Sang Bong also paid special attention to customizing clutches (with his black floral patterns, no less), quirky shades, and shoes to match each outfit. Just as the audience started to get used to his black and white outfits, a couple of sea-blue dresses made their way onto the runway, followed by an array of dazzling evening gowns in classic colours. 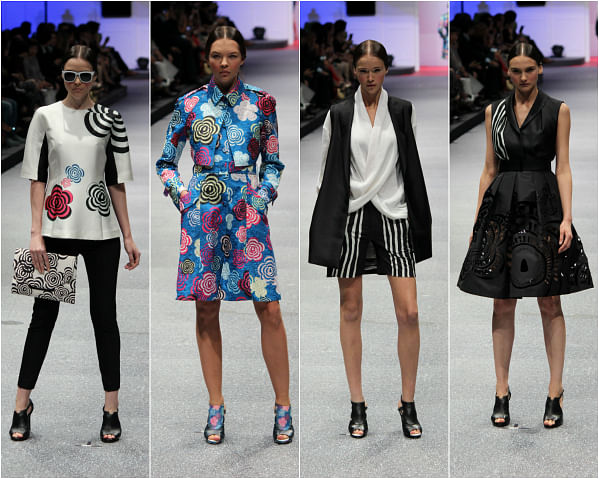 The Pièce de Résistance of the night was a pair of stunning twin gowns, one in black and one in white, which closed Lie Sang Bong’s Spring/Summer collection. What stood out most were the rib-cage like elements on the bodice which embodies chic x simple elegance.

Music and presentation was pretty ordinary (like your average fashion show), but he made up for it by focusing on detailing each model’s look. Overall, what we loved best about Lie Sang Bong’s collection was classic wearable chic – well, we would (if we could) buy them off the runway. Rating: 4/5

Sebastian Gunawan’s Mod Muse Spring/Summer 2014 collection debuted with much oomph, gliz and glamour. Unlike Lie Sang Bong, who customized accessories with his outfits, Sebastian seemed to focus more on how the collection was presented to the audience, which was unlike your average runway show. He started off with a Navy Blue collection, followed by a Glitzy Gold, and then silver collection. This was matched by a constant switching of heavy beat songs, unlike Lie Sang Bong, who stuck to a few light runway songs. 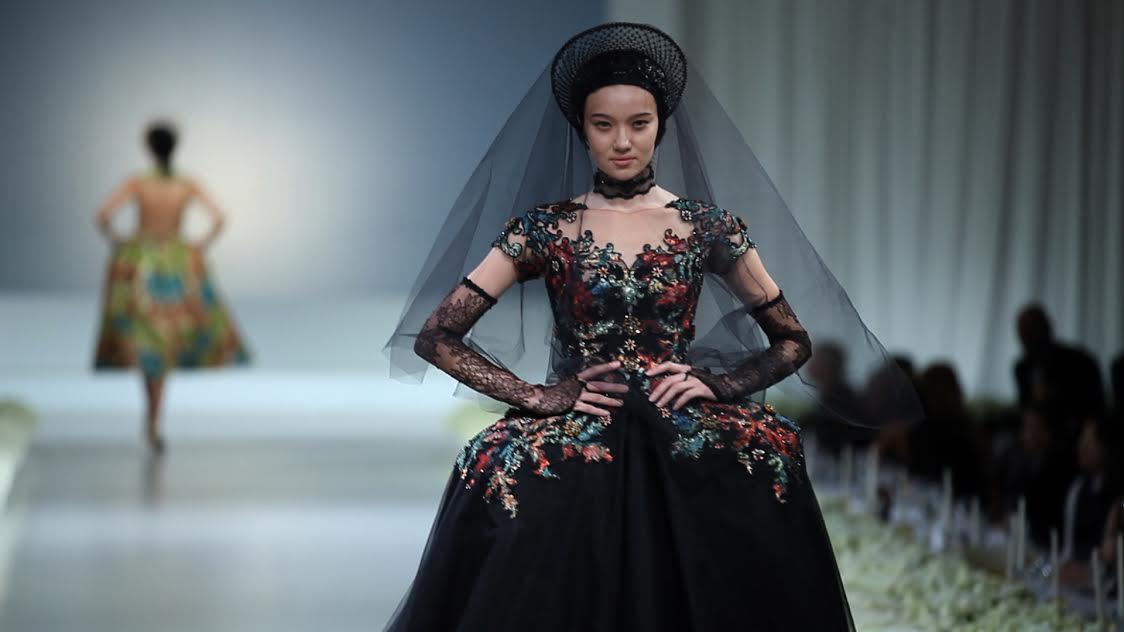 His pieces seemed to have the same detailing and colour code but only in different dress forms, which didn’t quite give variety to his collection. However, we really liked how he used nude gauze to create an illusion of backless Hollywood-esque dresses from afar.

Sebastian Gunawan’s collection had a rather Indonesian bridal feel, and was overloaded with shimmering sequins, glitzy fabric, glamourous details, and the likes – but was it too much? Overall, our team felt overly “blinged up”, and the jarring music didn’t quite help our ears. Though the constant switching of music beats was interesting, the music didn’t quite match the collection, which had a more romantic feel to them. A number of models also tripped on the runway (but kudos to their effort in being able to pick themselves up and strut on). Rating: 3/5

Yumi Katsura closed the night with a fabulous display of Japanese kimono gowns, evening gowns, and dresses. Though not fans of silk, ruffles or kimonos, we were impressed by Yumi’s talent and creativity in all aspects – variety of design, detailing and material in each outfit, and way the collection was presented. In many ways, Yumi Katsura made up for what both Lie Sang Bong and Gunawan lacked by paying attention to each detail on all aspects of the fashion runway (including changing the way each model walked to each outfit) – and she did it better.

Each model’s headgear, shoes, and accessories were unique, extraordinary, and customized to each model’s outfit. Not only did they have a Japanese element, she also incorporated detailed twists and quirky transformations of outfit within the runway walk.

At one point, an array of coloured dresses transformed themselves into elegant black ball dresses with a simple cloak flip. At another, male and female models sashay in arm-in-arm with matching kimono outfits. Long trains, Kimono-esque wedding gowns, and outrageous headgear grazed the runway, providing Yumi Katsura’s collection with that extra Pop!.

Just as the audience held their breath for what was next, the lights went off and the floor was silent, with nothing but a white gown with glow-in-the-dark bits and a glimpse of the Singapore merlion embedded in its train. Yumi Katsura’s collection closed to models strutting to our national anthem (who would guess that Majula Singapura would ever be runway song?) with both Yumi and her models waving our national flag. This was followed by a standing ovation by the entire audience.

Overall, Yumi gave the audience an impeccable display of haute couture twisted with her own mix of Japanese cultural elements. Our take? Impressive. Rating: 5/5